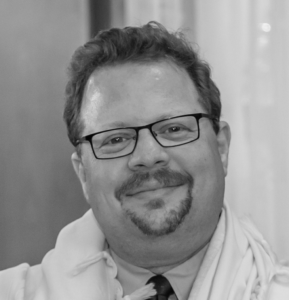 Rabbi Michael Fessler is a native of River Falls, Wisconsin and Columbia, Maryland.  After earning an A.B. in biology from Brown University and working for a short stint at a tech startup, his growing interest in Jewish learning and community-building led him to the Reconstructionist Rabbinical College (RRC). While a rabbinical student, he served in congregational, Hillel, and geriatric chaplaincy settings, as well as completing a year's internship at CLAL: The National Jewish Center for Learning and Leadership. While in Israel, he studied at the Conservative Yeshiva and the Masorti movement’s Schechter Institute of Jewish studies.
After graduation in 2001, he participated in the Melton Senior Educators program at Hebrew University, focusing on Jewish adult education. He served for twelve years as rabbi and co-rabbi of Congregation B’nai Tikvah-Beth Israel in Sewell, New Jersey in partnership with his spouse, Rabbi Miriam Hyman, leading that diverse, unaffiliated (though Conservative-leaning) community through an era that included a successful capital campaign, adoption of new prayer books, a move into a new building, and a merger. A top priority: to create many entryways into Jewish life and learning for people of varied backgrounds and interests.
After the family moved to Poughkeepsie in 2014, he served for six years as Associate Director of Online Content for RRC, building websites and assembling resources for individual and congregational use. Over the past several years, he has taught teens and adults at Temple Beth-El on topics ranging from Judaism and Science Fiction to Jewish Medical Ethics. He served as guest rabbi for 5782 High Holiday services, as interim rabbi starting in November 2021, and continues as the congregation's rabbi after June 2022.

Don't see what you're looking for?